Last night I managed a couple of games which found my Japanese (Post Mongol Samurai IV/59b) engaged against Ben’s Koreans (Yi Dynasty Koreans IV/78). It is an interesting historical engagement, with some challenges for both commanders.

The Korean commander, has been looking for some alternate tactics for his Koreans, which have an interesting and arguably challenging mix of troops. As part of this he was keen to place his recently completed fortress, modelled on the Japanese castle of Ulsan built in Korea. The scratch built, and themed for the period, castle provided an excellent terrain piece for our games. 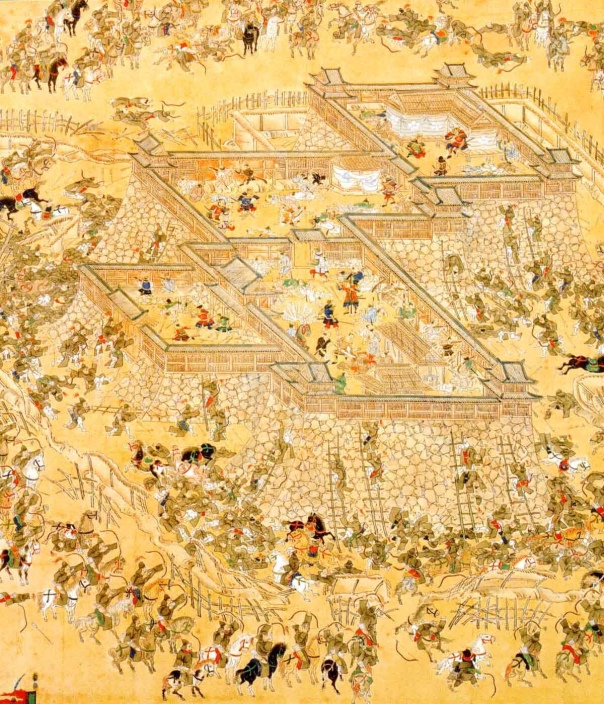 Above, a period drawing of Ulsan under attack while below a slightly simplified but very similar castle garrisoned by Korean peasant spearmen (7Hd). Note the different levels in both castles. 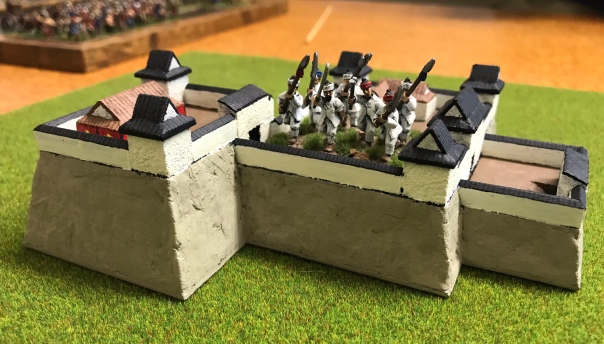 In the first game the Koreans were defending and the fortress was placed on the Korean right where it provided flank protection for massed Korean artillery and archers of the centre. The army stretched to the left where, on a generally featureless plain, the Korean mounted were massed. 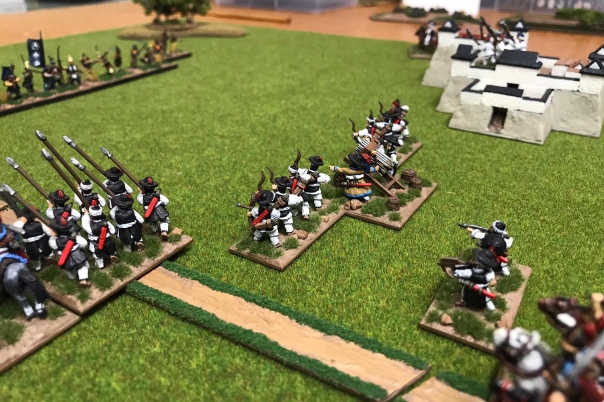 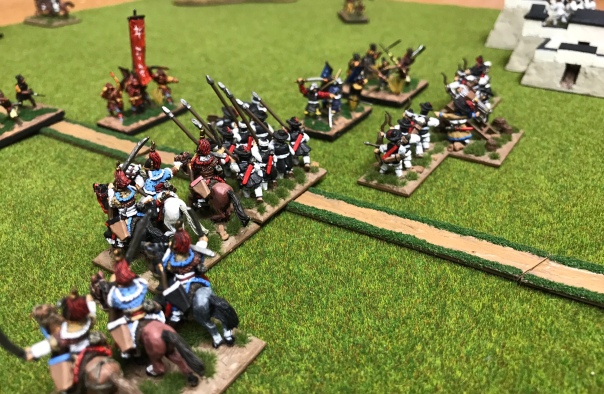 Alas, the Japanese were now themselves overwhelmed by the sally by the garrison which was combined with attacks by a hastily assembled cavalry reserve. The Korean victory was complete!

The second battle found the Japanese defending. To ensure the castle was used the Japanese player also placed it. In due course it was determined to be on the Japanese  left. Unlike the Koreans the Japanese intended to attack on the opposite flank using a series of rocky hills to counter the Korean mounted superiority. In this game the threat of artillery fire was deemed too great and the fortress was quickly abandoned. Though for some time Japanese archers threatened to reoccupy it and thus threaten the advancing Korean cavalry. 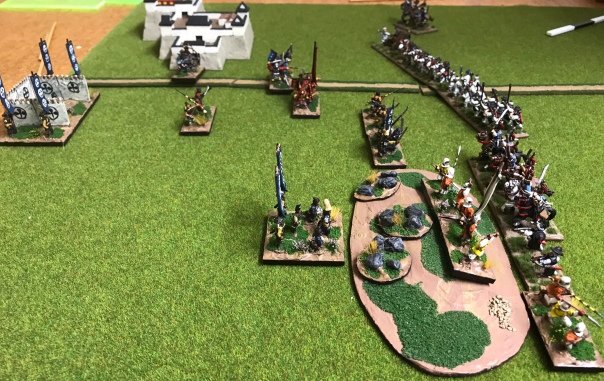 Above, the more general situation with the Japanese on the left. Below, the situation on the Japanese right flank showing a portion of the sohei warrior monks on a key rocky hill.

Eventually the monks, supported by mounted samurai, overwhelmed the Korean left wing. However, under massed pressure by the Korean pike of the centre, the Japanese army broke just prior to the collapse of the Koreans. 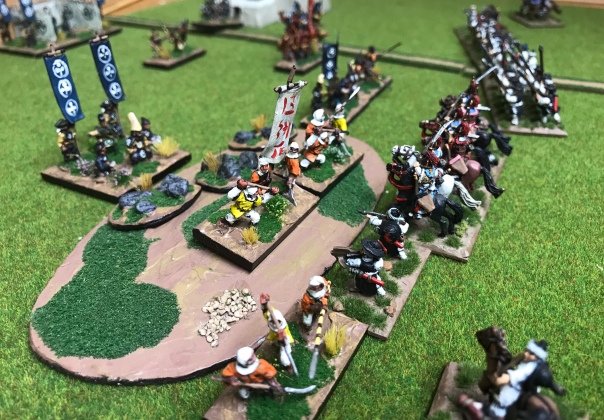 A couple of eventful games between historical opponents set against a superb period themed terrain feature. I must say I’m so impressed with Ben’s castle I’m tempted to try scratch building one myself…

One of my preferences is to fight historical, or near historical, opponents. Having recently played a number of games between Japanese armies of the Sengoku Jidai period it was with anticipation I prepared to face another players well painted Yi Dynasty Koreans (IV/78) army. While I’ve had my Japanese for many years I’ve never used them against the Koreans. Historically the Japanese invasion of Korea occurred in 1592, and therefore is officially outside the period of the DBA rules. However, the later armies are effectively the same as those covered by the rules, excluding an increasing number of arquebus from 1542. As a result only a little historical license must be taken to accommodate an earlier invasion of Korea.

The Koreans in this period have a mix of foot including many armed with long spear. Those of better quality are rated as pikemen while the militia, who are of lesser quality, are rated as horde. These are supported by massed archers, artillery and light troops. The mounted component is numerically significant and comprises both heavy and light cavalry. My own Japanese have a range of options but I selected the ashigaru derivative providing an army whose foot were mostly armed with yari (3Pk), a few archers and of course a solid mass of dismounted samurai. In contrast to the Koreans only a few samurai opted to fight mounted.

The Koreans deployed their army on a plain bordered by two rocky hills which restricted their deployment initially. As expected the infantry was on the centre and right and their mounted concentrated on their left. The Japanese centre comprised the dismounted samurai and the centre was extended on both flanks by ashigaru. Finally, on the Japanese right the token mounted samurai were deployed, their rear ranks bolstered by followers on foot. 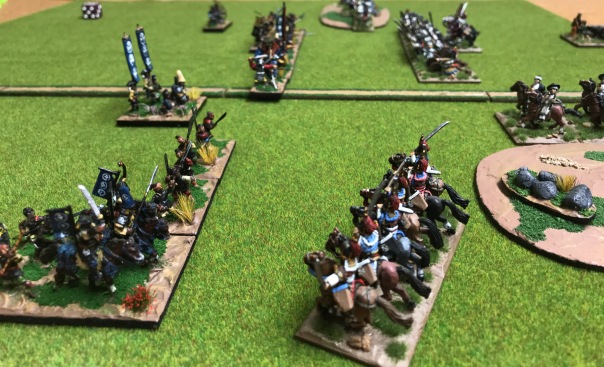 The battle began with a rapid Japanese advance which was clearly designed to restrict the Korean mounted deployment. The Koreans ignored this pushing their mounted to their left, arguably dangerously, as can be seen above. On the Korean right a rocky hill was secured by archers and light infantry, as can be seen below. 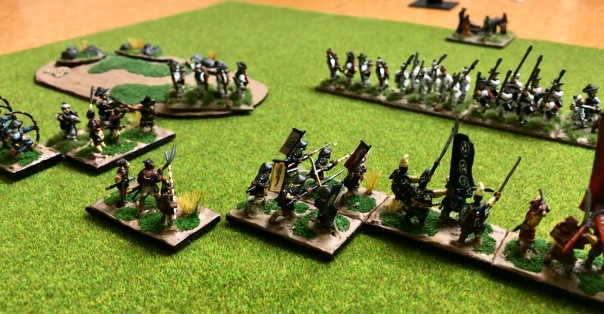 The Japanese right pressed forward with the intent of slowly driving the Korean mounted, to their front, back. The ashigaru, armed with yari (3Pk) had the advantage and it was hoped that eventually the Korean horse would be pushed back and caught between the rocky hill to their rear and the Japanese. Instead, the battle swung back and forward inconclusively.

The Japanese centre meanwhile was disrupted by Korean artillery fire. An assortment of carts equipped with rockets being particularly effective in disrupting the dismounted samurai. 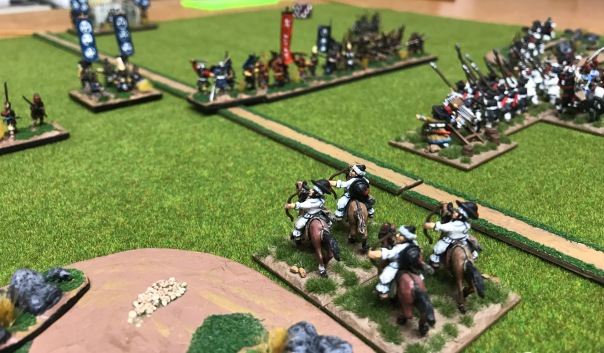 Eventually, on the Japanese left, a body of ashigaru flanked the Korean positions on the rocky hill on the Korean right and attacked the Korean main line from the flank. Simultaneously the Japanese samurai advanced in the centre engaging Korean spear and artillery. The Korean militia fought determinedly, pushing the ashigaru opposite back. The samurai, fighting the massed regular spear armed foot (4Pk) were more evenly matched.

Meanwhile, the battle on the Japanese right continued inconclusively. 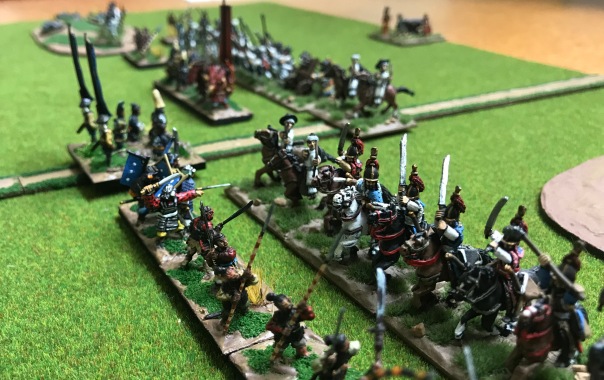 While the battle on the Japanese right continued inconclusively, above, a decision in the centre was approaching. Eventually the Korean artillery was overcome and aa a result the samurai swirled on to the open flank of the Korean spear. Attacked from the front and flank the Korean pike were overcome. 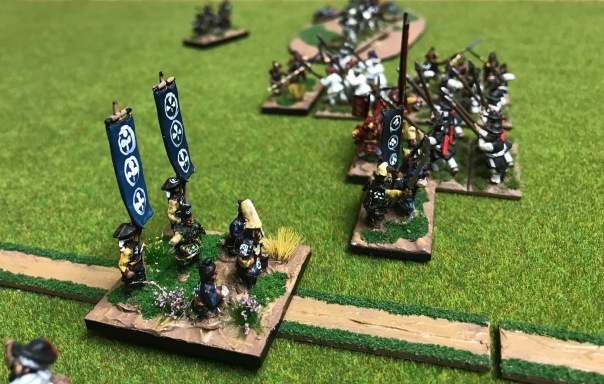 With this massive rupture of the centre, Korean resolve collapsed. The army, including the relatively organised mounted component, fled the field.

The game was fascinating and despite only having 12 elements in each army lasted over 90 minutes. The final result was a 4-3 Japanese win with the Japanese only recovering from a losing situation in the last few turns. I’m certainly looking forward to a rematch. 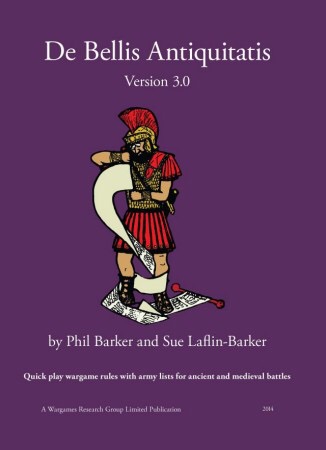