Last weekend the second competition of the Christchurch DBA Open was held, specifically the Medieval Competition. I forgot to take any photos on the day, which I’m frustrated with. That said a number of well presented armies were in play.

Unfortunately, player numbers were low with several regulars unable to attend. In the end the results for the Medieval competition were as follows:

The results were rather interesting with three players on very much the same points total at the end of play. Only the winner, Falk had a clear win across the event. Interestingly Falk has only been playing DBA for a few months so his placing was all the more impressive.

When the results from the Ancient Competition were combined with the Medieval results the final placings for the Christchurch DBA Open were as follows:

Another excellent local event organised by Brian drawing some interesting armies to the table in a low key and very friendly event.

Having been travelling for a while it was great to be able to sit down for some DBA gaming earlier in the week. Not only were the resulting games enjoyable, but visually very rewarding as my opponent Angus had recently completed another new army.

Given we have an historical matched pairs event coming up later in the month Angus was keen to use his proposed pair for some practice. So in due course the armies were deployed. They were III/28 Carolingian Franks and III/40a Viking. All figures are by Baueda.

I won’t try and describe the games in any detail. However, both games found the Vikings attacking and the Carolingian opting for an open battlefield, no surprise there!

The Baueda figures are very impressive, especially when well painted as these have been, and deployed on  a visually pleasing battlefield. I’m rather looking forward to seeing Angus’ next Baueda army, Norse-Irish.

I must admit I am very tempted to purchase some Baueda figures myself, especially after their release of dismounted Norman milites recently…

In late January I managed to attend an informal DBA games day in the small town of Pokeno, located south of Auckland, New Zealand. Drawing a total of six players we were treated to five rounds of games. Organised as a round robin each player faced off during the course of the day. Being a casual gaming day, rather than a competition, players were able to use different armies in each round resulting in a large number of armies being deployed during the day. The armies used during the day can be summarised as:

The following photos illustrate a selection of games played during the course of the day. 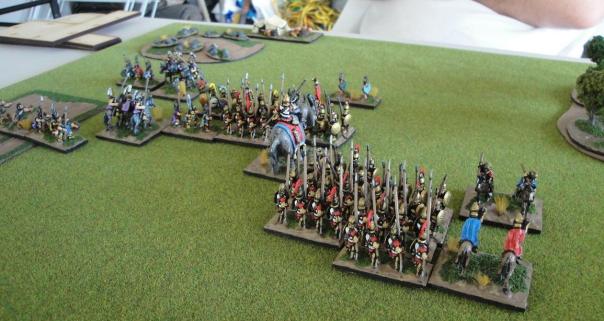 Above, a Successor engagement between Demetrius and Lysmichus. The phalangites of both Successors were locked in combat with each gaining advantage in different sectors. With both commanders desperate for a result they both led their own xystophoroi into combat, against each other, which is just visible in the upper left. 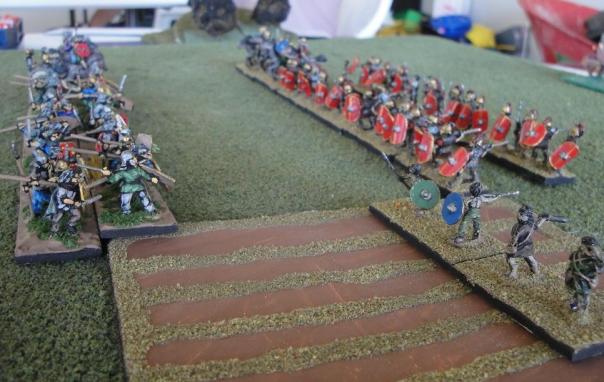 Above, Marian Romans engaged against Gauls. The Gauls have massed their army in deep formations to break the Roman centre. To counter this the Roman commander has a significant reserve to bring against any such breakthrough. Both armies use Corvus Belli figures.

Below, another Successor army, this time that of Pyrrhos of Epeiros engaged against a Polybian Roman army. Here the Romans, in the foreground, attempt to put pressure on the Greek left flank.

Below, another view of the Pyrrhic army. The figures, from Mark Davies collection, are mostly from the Freikorps 15mm range. The Romans are a mix of Essex and Museum Miniatures from my own collection.

Finally, a Dark Ages battle between the Middle Anglo-Saxons and Pre-Feudal Scots. In this battle the Scots launched a series of dramatic attacks with his fast moving spear armed troops. However, the Anglo-Saxon commander maintained a solid line and eventually Scots army broke. 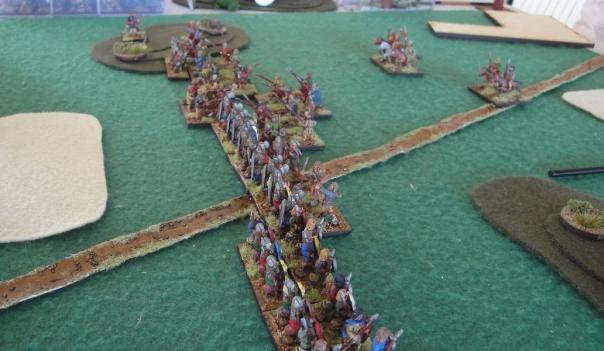 In all some 16 games were played over the course of the day, providing some challenging situations for all the players. If you are based in Auckland I encourage you to get involved with the DBA community based in the Auckland and southern Auckland areas.

For me it was a great oppurtunity to catchup with some old friends and enjoys a great day of gaming with a range of interesting armies. My next Auckland visit will be for the DBA competition at Natcon over Easter. Perhaps we will see you there?

Joe Collins recently provided a short article for this site covering Dark Age Warfare in DBA 3.0. I am sure that this will be well received and provide some interesting information on how the rules handles warfare in this period. The various photos are of Joe’s 25mm Dark Ages collection.

The development of the new version of DBA concentrated on several worthy goals. Phil Barker’s foremost was the elimination of geometric ploys and “gamey” tactics. Closely following this was a re-evaluation of fighting in various periods of history and how it is represented in DBA. Years of game play experience had revealed some shortcomings both in the historical feel of some periods as well as the actual game play. The most apparent of these was the Dark Ages.

Under DBA 2.2 most Dark Age battles were simply dull. The lack of troop differentiation, element definitions based on the classical period, and the very scale of the game conspired to produce lopsided and uninteresting games. The most glaring case was the match up of Vikings vs Anglo-Saxons. This rivalry usually featured the all “Blade” Vikings slaughtering the poor all “Spear” Saxons. The Pre-Feudal Scots didn’t fair much better. Their troops rated mainly as either “Warband” or 3Sp (Spear), essentially  they fought in the game just like the Saxons. Further, there was no real difference between Viking raider armies and the later Viking armies built from Norse peoples that settled in Britain. The Normans faired little better. Their large number of knights provided a good striking element against the Vikings. Rear rank support from Ps (Psiloi) given to Sp (Spear) elements however made battles against Saxons very difficult and rather odd. The battles featured weird, deep formations that didn’t look or feel how most view Dark Age battles. Hastings, while arguably a very difficult victory for the Normans, was rendered almost impossible reproduce.

First, Phil changed the ground and figure scale. While this seems an unimportant change in a 12 element game, many play larger scenario games based on historical battles. With 2.2’s scale of 1000 men per heavy foot element, all but the very largest Dark Ages battles were too small to recreate without drastic rescaling. Even Hastings could be barely be represented as a standard 12 element game. While this is not inherently bad, many battles besides Hasting are standard fare for Dark Age wargamers wanting historical refights.

Second, Phil changed the humble “Spear”. Instead of rear support, “Spear” is now given side support. Spears now receive a single +1 for having any side lined up with a “Blade” element or another “Spear”. This simple change, often referred to as the “shieldwall” rule, radically changes the feel of Dark Age battles. Gone are the odd deep pike phalanx formations to be replaced by more linear walls of shields. Now the Vikings are met with a wall of +5 to +5 combats and this match up is no longer a complete overmatch.

Third, Phil differentiated “Fast” troops from “Solid” formation troops. Now foot elements with 3 figures per base are rated as “Fast”. While moving faster than their solid brethren in close or distance combat vs “Solid” troops, they recoil on ties. This means that Saxons now are not only just +5 vs early Vikings, but the Saxons now recoil the Vikings on ties! Alfred the Great now has a chance to be truly great. The changes also affect the Scots. No longer is the Scot army just a standard “Spear” army. They are now rated as 3Pk (Pike). Fast and fighting in deep formation, they now better represent the savage fast moving army that Saxons feared. The Welsh are now 3Wb (Warband) and the master of quick ambush and sudden moves from rough and difficult terrain. Below, Scots 3Pk (Pike) move quickly forward.

Fourth, Phil updated the army lists and added allies. Now, later Viking armies can be better represented by a 4Bd (Blade) nucleus with a Saxon or Scot ally. Anglo-Saxons now have house guard 4Bd (Blade) elements matching the reading of Egil’s saga and further balancing this period. Normans can now have a large number of dismounted knights as 4Bd (Blade) to better match newer research into Hastings.

Finally, a host of smaller changes have added to the aforementioned. The faster tempo of infantry combat (e.g. Bd and Pk now pursue), the addition of new terrain types, the new game setup parameters, and the expansion of the army lists all work together to produce a more balanced and flavorful game. 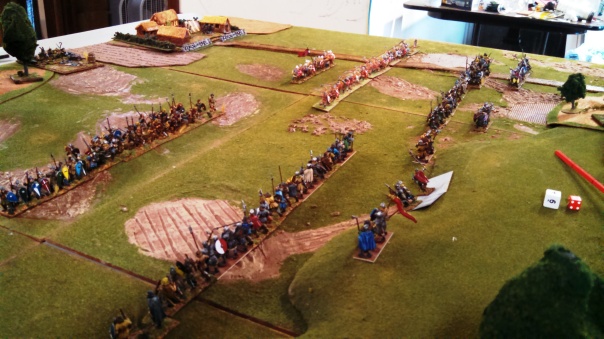 I strongly recommend DBA 3 for those interested in Dark Ages combat. A few quick games will show everyone a world of difference. What was once dull and one-sided is now a period of interesting and more even fights.