Friday evening found a selection of armies converging on my temporary gaming room for an evening of DBA. As it turned out a Galatian theme developed.

Our first battle of the evening found the Galatians (Ben) migrating into the provinces of Asia Minor and clashed with the Kappadokians (Andrew). The Kappadokians had suffered a series of defeats recently so were keen to turn the tables on the most recent invader.

The two armies deployed and it was soon apparent the Galatians were advancing in the centre and right. This rapid advance by the Galatian centre was countered by a thrust against the Galatian left flank through various rocky paths over an area of basalt peaks. Below, the Galatians prepare to engage the Kappadokian centre which is already scattered. Visible in the Galatian line is a Scythed Chariot.

As both armies manoeuvred they slowly became more disjointed with the likely result the struggle would be prolonged. However, a sudden series of attacks were launched by the Kappadokians with great elan and surprisingly the Galatian morale shattered as each attack was driven home with devastating results. The Galatians fled suffering a devastating 4-1 loss for their invasion.

Discouraged but desperate for loot the Galatians (Ben) moved west towards Greece. From here they moved south along the coast towards an army assembled by Ptolemy Keraunos (Keith). Keraunos, deploying first, placed himself in the centre of the phalanx astride one of his several elephants with the intention of smashing his way through the Galatian line. However, as the Galatans deployed he became increasingly concerned about his right flank. Seemingly oblivious to potential threats he undertook to expand his right by a series of complex manoeuvres. The Galatian left, comprising mounted, surged forward. Macedonian casualties were immediate with a portion of the phalanx breaking at first contact under the Galatian mounted onslaught. However, slowly Keraunos gained the advantage and the Galatian left was driven back.

Above an below the armies engaged. The Greek left is held by Greek mercenary peltasts (3Ax) who would fight valiantly for some time against Galatian armoured warriors (4Bd) and naked warriors (4Wb). Below, the Greek right and a portion of the centre driving back the Galatian left and centre. 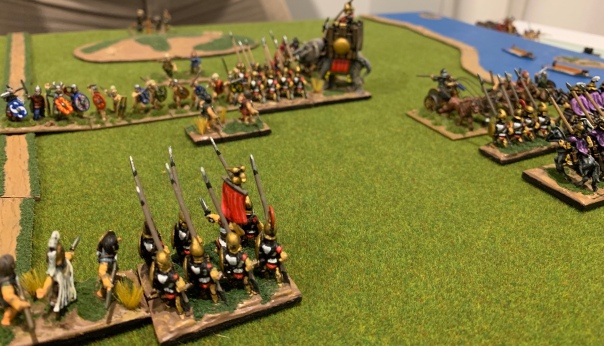 Elsewhere the fighting was both intense and certainly confusing with Greek sources unclear of all events. However, slowly the Galatians gained the advantage. Keraunos himself meanwhile, at the head of his pachyderms, pressed forward driving the Galatians to his front back. Though Keraunos fought valiantly his army finally collapsed with a 4-2 victory to the Galatians.

While the Galatians focused on their plunder Ptolemy Keraunos (Keith) reformed his army and move to counter another threat, this time by Antigonus Gonatas (Andrew). Gonatas had taken the opportunity to bolster his smaller phalanx with a number of Galatians, Greece was flush with mercenaries after all! Now both commanders deployed with their phalangites in the centre. Keraunos again deployed his elephants between the taxis in a commanding position on one beast. Gonatas meanwhile deployed on his left wing with his cavalry opposite Ptolemy’s mounted. On the opposite flank both commanders deployed their thureophoroi and other mercenaries, Ptolemy’s left flank resting on an small village. 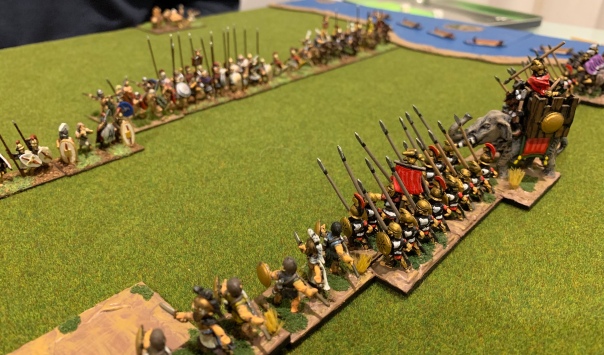 Above, Ptolemy Keraunos army on the right foreground while in the distance Gonatas’s army can be seen. In the top right a Greek fleet is visible, this fleet failed to intervene in the battle, no doubt more focussed on supplying the army, or providing morale support!

Gonatas advanced with his right leading. But it was here that he miscalculated and found his thureophoroi engaged by a portion of Keraunos phalanx. Now both commanders rushed to reinforce the battle with reserves and eventually portions of their centre. 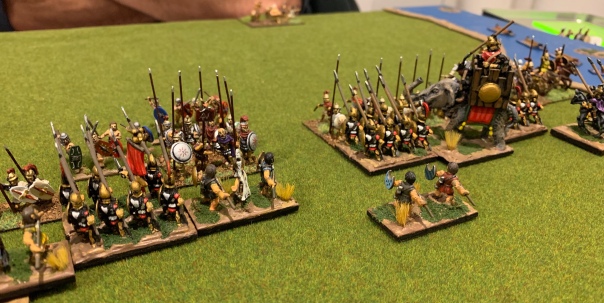 Above and below views of the centre and Ptolemy’s left where portions of the centre of both armies are being committed, creating a gap. Below, heavy casualties have befallen the Ptolemy left taxis visible here. Yet the survivors repeatedly drove back the Galatians who themselves had suffered heavy casualties. Likewise Ptolemy’s peltasts (3Ax) fought the Gonatas taxi to a standstill – amazingly. 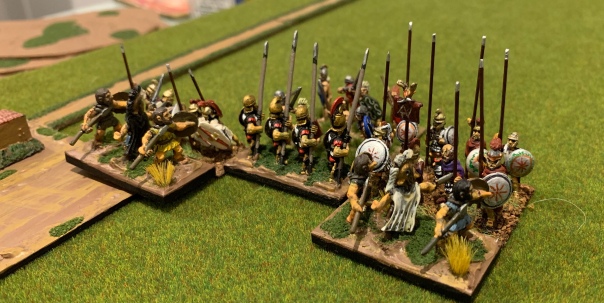 Meanwhile on Keraunos right flank the cavalry of both armies were now involved in deadly combat, with Keraunos reinforcing his mounted with phalangites deployed in open order. Simultaneously Ptolemy engaged Gonatas’ centre with phalanx and his elephants who desperately attempted to secure the breakthrough.

The battle was particularly confusing with first one commander then the other commander securing a small but fragile advantage, only to watch as these hard earned gains slip away.

Above, Ptolemy in the forefront of the fighting tries to turn a portion of Gonatas’ line.

Finally Gonatas, his own army near exhaustion, gained a final advantage and Keraunos’ army broke. Yet, too exhausted to seize any real advantage, the price of a 4-3 victory, Gonatas breathed easy realising that his own army had only just survived this desperate battle for domination of Greece and Macedonia.

Another outstanding evening of gaming and one that drew in the Galatians in some form into each battle. No doubt they will return as will their Greek opponents…