Over the weekend the local Conquest wargames convention was held. Yet again we were able to run a DBA competition, this year comprising two seperate events. The first day involved a standard DBA competition of six rounds, each of an hour. While the second day would comprise a Big Battle three round competition.

Looking at the first day the six rounds were further divided into two sections. The first three games involved the Ancient section and drew armies from the period up to 450 AD. The armies, except one, were all drawn from the Section II lists and all contained an interesting mix. At the conclusion of the Ancient Section Brian was 1st place with 33 points while Greg Kelleher and Keith McNelly were on second equal with 23 points each.

Below, a view of the Palmyran camp. A fine example of many well painted and presented armies.

The Dark Age and Medieval Section, played in the afternoon, also comprised three rounds and used armies from 451 AD. Of these armies a solid core were Late Medieval armies, including three Wars of the Roses armies and a hard hitting Free Companies. However, the Hussite army had several players scratching their heads on how to deal with the massed war wagons expertly commanded by Mark. After the three rounds of the Medieval section Mark Baker was on 24 points, Jim Morton on 23 and Greg Wells on 21 points.

Above, the Hussite host engage their enemy. Below, the Mongols prepare to advance against a Wars of the Roses English army. 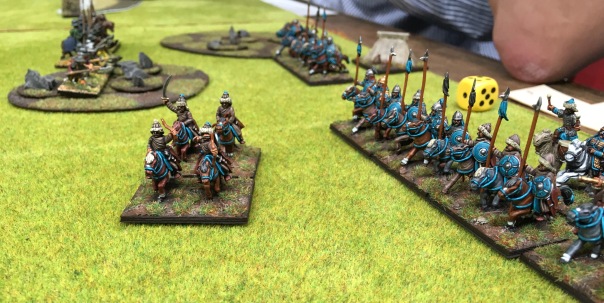 Below, Wars of the Roses English engaged against Free Companies, who unsurprisingly were invading English territories. The English maintained a good account of themselves through a combination of archery and cannon fire. 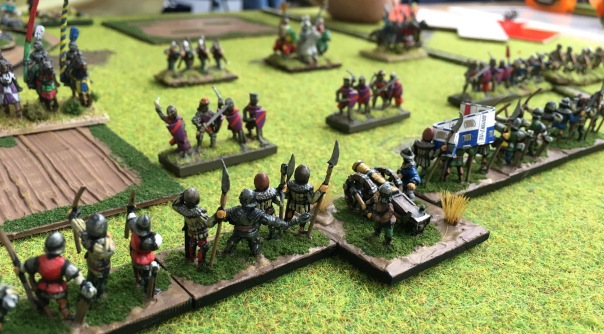 Combining the scores of both Sections provided the final placings as follows:

The second day of Conquest was allocated to an Ancient Big Battle event of three rounds. Most of the armies were similar to the previous days Ancient Section, with a few exceptions. Unfortunately, player numbers were a little lower with eight players participating. Of these players, a number had not played BBDBA with 3.0. Each round lasted 2 1/4 hours with a number of games going to the wire. Interestingly, unlike the previous day when there were no camps taken, a couple of camps were attacked and taken. Clearly the benefit of attacking camps in BBDBA were high on some players radar.

Below, Later Carthaginians engage Eastern Patricians. The Patricians were one of the armies that were supported by an ally. An ally can be a useful component for variety and to bolster a couple of standard DBA armies to the required size for BBDBA.

A revised scoring system was used for the BBDBA competition, after three rounds the placings were as follows:

I should add a few notes of thanks. Firstly to our competitors who all played as true gentlemen. I of course must mention our four out of town visitors, two from Australia and another each from Auckland and Blenheim, thank you for your support. Then we have those players who provided loan armies to help with the themes.

Finally, I would like to thank Comics Compulsion who organise Conquest and are so supportive of DBA. I encourage you to support them.