Classical warfare holds significant interest for me and in particular the clashes between the various city states of Ancient Greece. One of the interesting additions to DBA 3.0 is the new troop type of 8Sp.

This new troop type is only found in the the Theban II/5c list. It represents the very deep formations of hoplites used by the Theban general Epaminondas at battles such as Leuctra (371BC) and Mantinea (362BC). While I’ve used temporary elements to represent 8Sp in other games it has only recently that I have painted and based two of 8Sp elements. Below, two stands of Theban 8Sp supported by other hoplites in shallower formations.

The 8Sp have a basic factor of 4 increased by a +1 when fighting enemy foot in certain circumstances. Further they receive an additional factor for flank support like other Sp. Finally, if the 8Sp element represents a general a further factor is obtained. This means a 8Sp Theban general can have a factor of 7. However, the loss of a 8Sp, especially an 8Sp general, can however be demoralising for an army.

To put the recently completed Theban 8Sp to the test they were engaged in two battles today against my son’s Lysimachid Successors.

The first battle was a traditional affair fought over an open plain. The deep Theban hoplite phalanx was engaged against the Successor phalanx and xystophoroi. The hoplite phalanx held long enough in the ensuing melee for the Theban allied hoplites, in shallower formations, to defeat the Thracian mercenaries that extended the Successor left.

The second game was even more entertaining. Lysimachos had drawn up his army near a Theban city some distance from a river. He prepared to assault the city with a portion of his army while his main army prepared to engage a Theban relief force drawn up on the opposite banks of a river. Rolling a low initial PIP die the Theban hoplite city garrison sallied out of the city on turn one in an attempt to pin the Successor line.

Below, on turn two the Successors can be seen on the right of the river. Lysimachos had ordered forward his main army while delaying the hoplites who have sallied from the city. At this point the river had been found to be a significant hinderence to crossing. The Theban main army is on the left with increasing components of the Theban relief force advancing across the river at a ford, the only practical location to cross.

As the battle developed more Thebans crossed the ford and eventually the battle turned 90 degrees to the initial deployments. The city was for a time captured by the Successors, but was in due course recaptured. 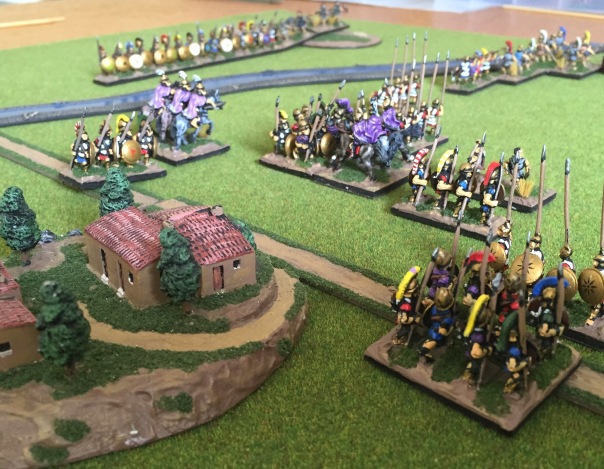 The battle continued back and forward for sometime with Successor casualties mounting. Eventually however the Theban general, an 8Sp, was lost. This single element, counting as three for purposes of victory, bought the losses of both armies to the same level.

The battle now continued on a knife edge. Theban hoplites, despite the loss of their commander, attempted to hold the line while attacking the Successor camp. Success here would have secured victory. Yet the hoplites were repulsed and with the repulse all hope of a Theban victory.